I knew when I read Angela Quiram’s Nerdy Book Club review of this book, I had to check it out. It seemed like it had all the things I needed for my incoming 8th grade girls: high school girl drama (which they can’t seem to get enough of), it’s written in verse (which I want to try to expose them to), and it might have a good message (and who doesn’t want that?). So I picked it up from the library, and read it. In about an hour or so. Or maybe it was two. I think I slept in between.

Anyway, the story is told to us through the poems of three different girls: Josie, Nicolette, and Aviva. They’re each different, spanning some of the common high school cliques. But they all have one thing in common: they dated T.L., the school all-everything jock and all-everybody jerk.

T.L. is a bad boy — the bad boy from the title. Each of these girls fall for him as he plays his games, and as soon as he gets what he wants (sex or the realization that sex isn’t going to happen), he’s moving on. To T.L., girls seem to be nothing but something to use, and to put up on a tally sheet. But this isn’t some John Tucker Must Die-esque story of him and how he sees the error of his ways. This is the story of the girls he has cast off.

Josie is the first in the story, but certainly not the first in T.L.’s string of girls. She falls — hard — and is hurt — badly. But she’s not going to just take it lying down. She’s going to warn others. So she begins to send messages to other girls, using a particular Judy Blume title in the library. Not everyone heeds the warnings, though, however true they are.

What I really liked about this book is that it does go through just how the girls end up falling for him — seemingly eating out of the palm of his hand before they knew what was going on, not matter what their intentions were upon meeting T.L. They learn their lesson from this. Hopefully readers of this book can learn the same lessons without going through all the same experiences.

What I didn’t like about this book was how graphic it is at times. I think the message of the book is a good one for 8th graders heading off to high school next year. But I don’t think some of the scenes in the book are appropriate for 13- and 14-year old girls. Some will be just fine with them, but some won’t. I’m not sure if I’ll have this in my classroom or not; I’m leaning towards no.

I do recommend this book for high school girls, though. It’s a quick read, and it’s a good exposure to novels in verse. It may be a way for some of the Pretty Little Liars fans to get into books written in poetry, whereas they may not get into the same edgy stuff that Ellen Hopkins writes. 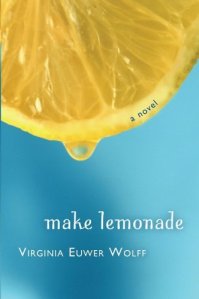 “When life gives you lemons, make lemonade.” Such is the common aphorism that lends itself to the title of this novel told in blank verse. Our narrator, 14-year old LaVaughn, thinks she has some lemons in her life: she lives with just her mom in a not-so-great neighborhood. She has dreams of college, but she would not only be the first in her family to go, but the first in her entire 64-apartment building. Her mom has told her the work it will take. More than that, it takes money, too. So LaVaughn looks for a job.

She finds one, and it’s a wake-up call to what real lemons are. LaVaughn becomes the babysitter for 17-year old Jolly’s 2 children. Their apartment seems to be a place not fit to raising two children: stains and spills abound, and there’s a sticky coating to everything. LaVaughn’s mother does not approve, but she’s hesitant to tell her daughter to leave the job. She seems to know the true importance of it. Read this wonderfully-written book to see how LaVaughn and Jolly learn from each other, and how they each learn to make lemonade.

I am very impressed with this book. The story is powerful, if not a bit predictable. The poetry used to tell the story, though, is fantastic. It is blank verse, but don’t let that fool you into thinking poetic devices aren’t used. Metaphors, allusions, and repetition abound. Rhyming is avoided, but slant rhyme is inserted delicately, like someone placing a seed into the flesh of a lemon. The verse is great, and it definitely enhances the reader’s experience of this story.

I recommend this book for 8th graders and up, especially high schoolers. I think it’s a story that we all should hear, and the poetry really adds another nice angle to it. However, there are some thematic issues with Jolly’s pregnancies, particularly how they happened, that may not be appropriate for our younger readers.