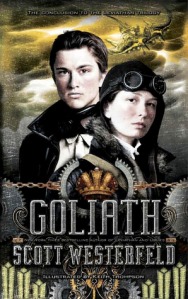 The ending of the Leviathan series, Goliath wraps up the story of Deryn/Dylan and Alek, and we see a revisit from just about all the main players from the other books along the way. In this tale, the Leviathan is carrying our heroes across Russia, to rescue a mysterious Clanker boffin. Adding to the mystery is the machine smuggled aboard for this man. We find ourselves seeing Clanker and Darwinist work side-by-side closer than ever in this book. Sparks are also flying between our characters, both figuratively and literally. What will happen to Deryn and Alek? Will Alek complete his destiny and end the war? And what of Dr. Barlow? She seems to have her hand in everything — what will her role be in all of this? These questions are answered for us as we read (or listen) on.

I had been anxiously awaiting the finale in the series, and then found myself caught up in so many other good books that this was pushed to the side. Then, I was given a recommendation for this one as an audiobook, and it just so happened that the good folks at the downtown Ann Arbor library had it in stock. I was instantly hooked by Alan Cumming’s narration. There are so many dialects and accents (not to mention hidden genders!) that he is so deftly able to read. His voice really brought the book to life; I still hear their voices in my head, a few days later.

As for the book itself, I was not disappointed. Following the pattern set forth in the first two books, Goliath alternates narration between Alek and Deryn as the story proceeds. This really was a great way to tell the story, especially as they are closer than ever after the events of Behemoth. I was really fascinated by the history that I never knew about (a lot of what goes on in this book is true — excepting the flying man-fabricated hydrogen-breathing whale, of course). I would love to talk more about the story, but there’s so much to tell that it’s really better if you read it and find it all out for yourself.

Side note: it was interesting to hear a Scottish man voice an American accent. Do we really sound like that?

I recommend Goliath to those who enjoyed the first two in the series. If you liked those, you’ll like this one as well. In general, if you haven’t checked out the Leviathan series, it’s a great introduction to a war-based steampunk style of book. I think we’ll be seeing a lot more of this genre in the next few years, and this is quite an enjoyable way to get into that.